Which One Are You? Hurt Purest Or Bewildered Materialist? 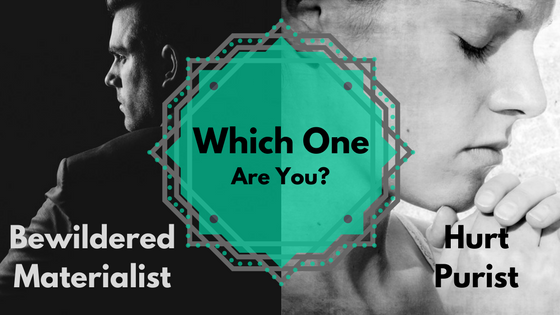 The following has been excerpted from my new book Eternal Dharma: How to Find Spiritual Evolution Through Surrender and Embrace Your Life’s True Purpose. This particular excerpt was posted on two other popular websites that have hundreds of thousands of regular visitors, so I thought you might like it as well. Enjoy!

The myth of the spiritual and material divide

While travelling on my world tours and meeting people of all walks of life, I’ve observed a common idea that causes people so much distress. This idea says that the spiritual and the material are two separate things.

This misconception says that all things in the spiritual domain are of one nature—they’re made of one type of thing—whereas the material, the physical, the things of this world that you can see and touch, are essentially made of something different.

The problem with subscribing to this myth is that it inhibits your ability to not only be effective, but also to lead a happy, balanced, healthy and integrated life.

I’ve found that there are two types of people or psychologies that lead to the Myth of the Spiritual and Material Divide. I describe them here so that you can see if you’ve been influenced by these mindsets.

If you want every action you take and every experience you live to be the most effective possible, and to inundate your being with passionate spiritual bliss, then you must learn how the spiritual and material are integrated and how to act in accordance with their integration. Artificially separating these things will only hurt you in the long run.

Group One: The hurt purist

These are the people whose life wasn’t working well for them. They’ve had lots of bad luck and have gone through large amounts of suffering. They came to the spiritual path to end their pain and it worked. The spiritual path helped them tremendously and they were able to minimize their pain.

Of course, this destruction of pain by spiritual process is a good thing. We don’t want anyone to suffer, and desiring to end the pain that life sometimes throws at us is a perfectly normal and good motivation to begin with on the spiritual path.

One of the problems with being spiritually motivated because of high amounts of distress is that it opens some people up to the misconception that the world is somehow wrong, evil or bad. Because the world was hurting this first type of person so much, it makes it easy for them to villainize it and thus be propelled into a binary way of thinking that says that there’s a separation between the spiritual and the material.

Such people may conclude that to run away from the world, to criticize it and to minimize any involvement with it are the best things to do. They think that abstaining from any successful action is better than intelligently pursuing success, financial well-being or any form of achievement in this world.

Search your mind and heart and to see if you have any ill feelings toward the material domain. If so, search to see how much is there because of the suffering you’ve experienced.

This kind of introspection, where we find our limitations, shortcomings and darker sides, is scary and takes a certain radical honesty. I admire you for attempting it.

First pitfall of the hurt purist

The Hurt Purist often idealizes a spiritual figure like a Guru, prophet or saint, and projects their misconceived binary idea of a bad material world and a good spiritual world onto that spiritual figure. They imagine that the spiritual figure is “pure” and has no material engagement or involvement, and is therefore perfect. They think that if someone is fully spiritual they can’t be connected to or involved with anything material of this world.

It’s impossible for them to ever live up to the ideal of the idea they’ve created of this person. The Guru or spiritual figure didn’t abide by these false standards because this idea of so-called purity as a disengagement from the material domain lives in the follower’s mind, not the Guru’s.

The Hurt Purist thus feels inferior; they feel incompetent and just quite useless on the spiritual path. They see that their only hope to fully end their suffering is to become like the mental image they have of the Guru or spiritual figure. But this is impossible, because the idea they’ve made is a mental fabrication and is unrealistic. Thus the belief system they’ve built leaves them doomed to feeling like a failure, guilty and inadequate.

Inherent in all of this is the wrong thinking that the material domain is separate from the spiritual domain.

The fact is, one who’s fully enlightened is often a master of dealing with this worldly material domain. We respect such enlightened beings not because they retreat from the world, nor because they may be rich, but because their hearts are full of spiritual love, which is the most beautiful thing in existence.

Projecting this false view of spiritual advancement onto someone, even if they’re fully enlightened, is detrimental for our spiritual growth and for our sanity in general. This is because such a view is not only based on a fundamental flaw in understanding the nature of life, the world and the spiritual path, it also encourages people to be lazy. It takes the responsibility off of the individual to practice and progress spiritually, because by projecting, one can simply live in a fantasy world, vicariously living out concocted spiritual fetishes through an idealized spiritual figure. Be careful of this. The world is connected, integrated and part of the spiritual domain.

Simply because there’s pain and illusion in the world, that doesn’t make it bad or wrong. It’s not about the world being good or bad; it’s about your relationship with it. You can and must one day use this world, which has manifested from the divine, as a tool and offering in order to enter into the higher blissful spiritual states of Passionate Enlightenment.

A note on detachment: Spiritual advancement comes from Spiritual Surrender and is a passionate, loving relationship with the divine. A detachment from ego-based selfish interest is a natural side effect of spiritual growth. Detachment is an essential, integral and powerful part of spiritual growth, and for a spiritual figure to truly be highly advanced, they must be detached from the vices of the world. But remember, there’s a stark difference between detachment and disengagement. Spiritual elevation or purity has everything to do with spiritual love, dedication and detachment, and nothing to do with a disengagement from the elements of this world.

I believe the support and the grace of spiritual guides is essential in spiritual growth. The key distinction here is this: Do I let that grace or a false notion of purity make me a passive participant in my spiritual journey, rather than an active one? Action is part of our Eternal Dharma and is therefore key in our spiritual growth.

When we’re not fully enlightened, the majority of what we do is material, because we’re still learning to integrate and operate properly with the spiritual. Therefore, believing that this material world is separate from the spiritual domain can lead people to feel that they’re bad and that something is wrong with them because they spend most of their time interacting with, and thinking of, worldly things. Because of this they may have unhealthy feelings of guilt, which not only sucks the joy and vitality out of life but can even get in the way of their spiritual path. Low self-esteem is not spirituality and neither is feeling guilty.

The second group of people are the ones who are doing OK in the world. They may have had some successes and they’re getting a certain degree of pleasure and gratification from life. This group also includes those who may not “have it good” yet, but aspire to it. They want to enjoy and they believe that it’s possible to achieve complete happiness through material endeavours alone.

When divorced from the divine, the pleasures of the world have a hypnotic effect and are almost drug-like: They dull our minds from being able to see things as they actually are.

By indulging, or attempting to indulge in the pleasures of this world while negating the spiritual, a person’s mind becomes bewildered and they may begin to think that this world is the all-in-all. They may think that they’ll do what needs to be done to fulfill their desires and then they’ll be satisfied. They falsely believe that they have control. This illusion tends to blind them from the suffering of this world and even the suffering caused by their endeavours.

A strong example of this is of a drunkard or drug addict. They think that if they can just get their fix, then they’ll be happy. But they fail to see that getting their fix and endeavouring in that direction is what’s causing their pain. By indulging their vice, they’re actually being bound and degraded more; they’re moving further away from happiness, joy and freedom.

The example of a drug addict is a bit of a strong one, but this same principle applies for those who are absorbed in this world while neglecting the spiritual domain. This absorption in enjoyment may take the form of one’s vices, or other less noticeable mundane actions such as work, family, friends, etc.

I’ve heard that some religions propagate the idea of the spiritual/material divide. I think that one of the main reasons why they’ve done and do this is because of the fact that many people who intensely follow and propagate religion are often Hurt Purists.

The integration of the spiritual and material

Even though, as I’ve described, the spiritual and material are in a sense one, they also have their individual natures and functions. They function both separately and in a way that enables them to nourish and support each other. They’re integrated, and if we’re to be effective and happy in the world, we must learn to act in an integrated fashion where both the material and the spiritual are allowed to operate at their fullest and synergize together. This type of integrated action is proper action, it’s action in dharma.

For there to be real bliss, power, harmony and effectiveness, we must appropriately engage and integrate the spiritual and the material into our approach to life. We must learn how to turn every action into a love-based spiritual phenomenon.

To get a copy of my book along with some really special bonuses go to EternalDharma.com or Order directly on Amazon.

You will love it!

Ps, If you have found this article of value, please kindly share it with others so they may also benefit.

We're not around right now. But you can send us an email and we'll get back to you, asap.